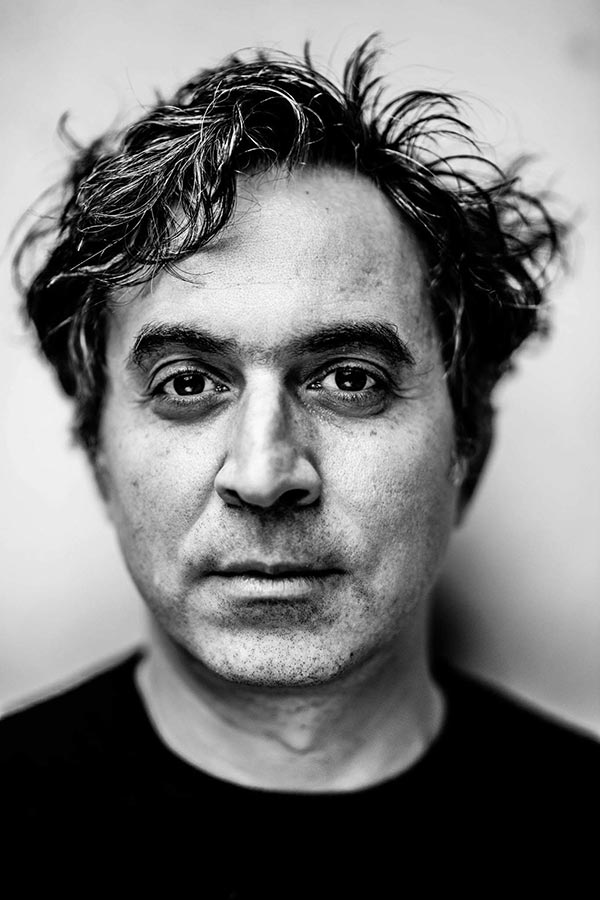 Yannis Kyriakides was born in Limassol, Cyprus in 1969, emigrated to Britain in 1975 and has been living in the Netherlands since 1992. He studied musicology at York University, and later composition with Louis Andriessen and Dick Raaijmakers. He currently lives is Amsterdam with his wife and two sons.

As a composer and sound artist he looks for ways of creating new forms and hybrids of media that problematize the act of listening. The question as to what music is actually communicating is a recurring theme in his work and he is often drawn to the relation between perception, emotion and language and how that defines our experience of sound. In the last years his work has been exploring different relations between words and music, both in concert compositions and installations through the use of systems of encoding information into sound, synthesizing voices and projecting text to music. The latter work has led to about 20 music text films that play on the idea of imagined or inner voice.

Yannis has written over a hundred compositions, comprising mostly of music theatre, multimedia and electroacoustic works for chamber groups and large ensembles. His work has been performed worldwide at many of the prominent music festivals, and by many leading contemporary music ensembles. His opera an ocean of rain, opened the Aldeburgh Music Festival in 2008. He has been featured composer at both Huddersfield Contemporary Music Festival 2007 and November Music 2011 (NL). Recently his sound installation work has been receiving more exposure and he contributed two works for the the Dutch Pavilion at the Venice Biennale in 2011.

In 2000 he won the International Gaudeamus Composition prize for his composition a conSPIracy cantata. The CD Wordless, recieved an honorary mention in the Prix Ars Electronica 2006, and his recent CD, Antichamber won a 2011 French Qwartz Electronic music award. Other prizes include the Dutch Toonzetters prize for best composition of 2010 for paramyth, the Willem Pijper Prize for dreams of the blind and the International Rostrum of Composers Prize 2014 for words and song without words. Together with Andy Moor and Isabelle Vigier he founded and runs the CD label for new electronic music Unsounds. He is a founding member of the ensemble MAZE, and teaches composition at the Royal Conservatory of Music in The Hague.