oneiricon is an interactive score devised for iOS based on an early Byzantine dream interpretation book (book of Daniel).

The Oneiricon App can be downloaded from the iTunes App store. Instructions for use can be found at the bottom of this page.

The score itself has two modes. The first is a ‘reading’ mode, in which the player scrolls through a dictionary of sorts - an ‘oneirocriticon’, a dream manual from the 11th Century. The players can navigate through this text, word for word, controlling the speed by moving their finger on the screen. In this mode each word appears one by one, in the order that it appears in the Oneirocritocon of Daniel .

Phrases such as the following appear:

In the second, performance mode, the letters of randomly selected words from this text, appear one by one, superimposed on each successive word, letter by letter. The letters of the words are assigned to specific notes, based on a fixed mapping created using a letter frequency analysis, so that the more common letters such as E, A or T are mapped to more consonant pitch relations, least common letters such as Z, Q, or X are mapped to more dissonant or distant pitch relations. Once running the score can generate a near infinite combination of letter super-positions and permutations.

There is an open cryptographic approach in this piece to how the text and pitch information come across to the musicians and audience, there are semantic relationships formed between what we are reading and hearing, because they are slow enough to follow note per letter; what kind of meaning that engenders is of course ambiguous and subjective. This ambiguity of meaning is a concept that resonates with the subject of the piece. The culture of dream manuals arose out of a desire to give fixed, unambiguous meaning to what has been one of the mysteries of human consciousness, to give signification to something that seems to be communicating to us, in the language of personal, emotive imagery.

These Oneirocricita, books or records that offer the reader an interpretation of their dreams through the methodical description of key images, have a highly unambiguous ascription of meaning. The motivation behind the piece lies in taking this sense of authoritative and ultimate interpretation and opening it up to the ambiguity of meaning that an encoding into music brings. Both text and musical narrative is deconstructed into half formed words and phrases, that in a collective reading/performance would interlink into something that seems to be loaded with meaning but where in fact that meaning is almost random, evasive and constantly modulating; perhaps just like dreams.

Oneiricon was composed for Ensemble MAZE and first performed at the Angelica Festival Bologna, May 2014. The original version of the score was created on the Processing platform by Yannis Kyriakides. The app version was developed by Andrea Vogrig and Darien Brito.

There is a slight bug on the iPad version of the score. You have to lock screen (or just open) in portrait mode, but view in landscape - otherwise the score only fits half of the screen. Ensure that the volume and alert sounds are both toggled on.

Oneiricon may be played by any number of instruments or voices, real or imagined, and can last any amount of time.

The two staves represent treble and bass clef. Notes with line going up means sharpen - notes with line down means flatten. If it is being read by a transposing instrument, choose the suitable transposition in the settings page.

How to read notes

Groups of notes are repeated as phrases, adding or taking away notes as they appear. Try and synchronise with the rest of the ensemble and also with the pulse that is heard from your tablet. The net result should be an en masses gradual morphing of phrases, delicate and articulate.

The Pulse and Sine tones can be toggled on/off with the icons at the bottom of the screen or in the settings. 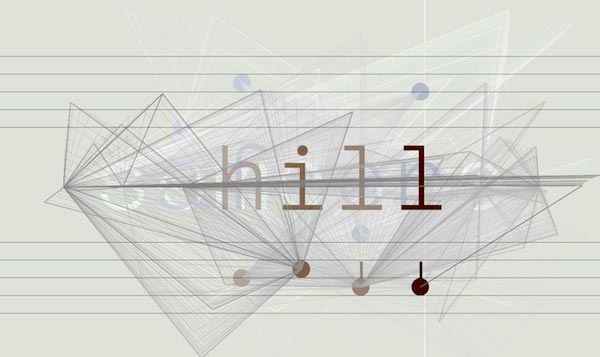