This piece was written for the opening of the Sea Songs Festival held in Karpathos, Rhodos, Greece in June 2000. It is an electronic composition which weaves together fragments of Greek traditional music with digital soundscapes. The music takes the character of the sea in its slow unfolding - the hypnotic ebb and flow of the tide - waves moving in cycles of seven - growing in intensity and dying away - from the sparkling texture of the surface water - the pull of underwater currents - to the black depths of the sea bed. (The sea remembers everything).

The principal sounds of traditional music used are the lyra (a sample of Sokrates Sinopoulos), the violin (myself), and the voice of the famous singer Dimitris Kulkas (Barba Mitsos). A sample of his monody (recorded when he was 85) slowly unfolds throughout the piece like fragments of memory being washed up on the shore.

During the performances which took place in what was to be a very windy situation by the harbours, a choreography by Vassilis Zidianakis was performed by Marianna Kavalieratou and Angeliki Moutsopoulou. 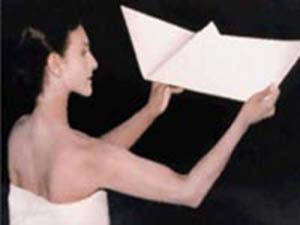