macguffin for solo electric guitar, was commissioned by and dedicated to Wiek Hijmans.

The sound world of the piece is based on the exploration of distorted dyad and the difference tones they produce. A “secret melody” is heard in the difference tones, the lower “ghost” notes that result from the the distorted played notes. This melody is in fact a quotation from Alfred Hitchcock’s 1938 film The Lady Vanishes. In this film, Miss Froy, an unassuming governess and music teacher, has to memorise a melody performed by a folk-singer somewhere in Tirol, and bring it back to London, because the melody contains a secret message about a treaty between two European countries. This is the so-called “MacGuffin” of the plot, the device which triggers the narrative of the film, yet remains unexplained or unimportant in the unfolding of the rest of story.

There are two possible versions of the piece, with and without multimedia (video and soundtrack). The audio consists of 3 sound clips from Hitchcock's The Lady Vanishes where Miss Froy’s melody is heard. The video, which is cued at specific points in the score consists of processed images for the film with key nouns of the plot projected. 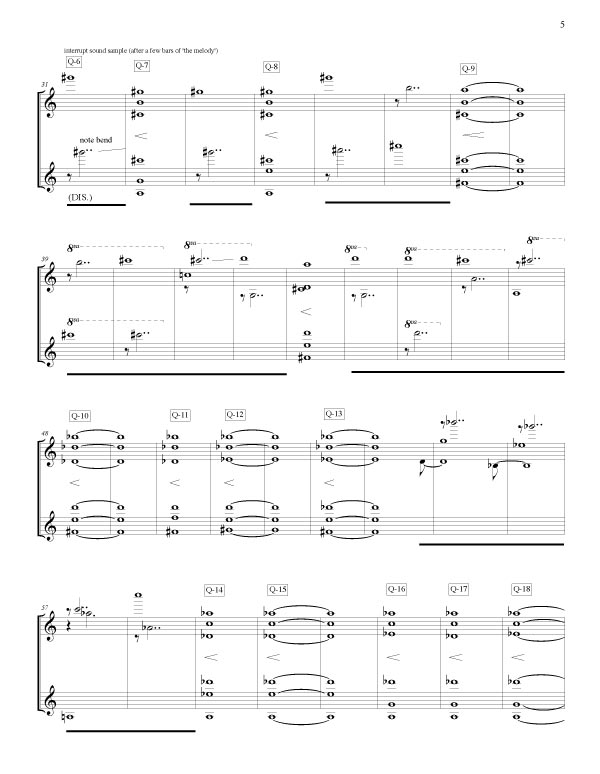 The music can be ordered from Donemus Publishing House, Amsterdam.